Why are we creative? Why do we seek to write, sing, and paint? How can we make something from nothing?

Tolkien’s The Silmarillion speaks of the creation of the Ainur, the Holy Ones, by Ilúvatar’s hand, by the Flame Imperishable, the secret fire. What is this secret fire? Whatever it consists of, the Secret Fire is heavily associated with sub-creation, the making of a world in which both onlookers and the creator can enjoy.
After rashly making the Dwarves, Aulë the Smith, one of the Valar, says to Ilúvatar, “The making of things is in my heart from my own making by thee and the child (that) makes a play of the deeds of his father…(does so) because he is the son of his father.”
The making of things is in my heart from my own making by thee. Tolkien’s essay “On Fairy-Stories” goes further into this concept, but Aulë’s words struck me with their poignancy. We are creative because we were created in the image of the great Creator God. But our acts of creation are not as powerful as his, for while we may paint a rainbow or sculpt a stallion, only he can make the rainbow or the stallion. No matter how real our work is, it is only a mirror of God’s work.
But earlier in The Silmarillion, even before the making of the Dwarves, Ilúvatar sits and listens to the music of the Ainur. He then takes them to the edge of the Void and shows them a vision of the world that is to come. When the vision fades, he speaks of their desire for this vision “shall verily be; not only in your thought, but even as ye yourselves are, and other. Therefore I say: ‘Eä!’ Let these things Be! And will send forth into the Void the Flame Imperishable, and it shall be at the heart of the world.”
At this point, one can see that the Flame Imperishable, the Secret Fire, is of Ilúvatar, and with Ilúvatar, and yet separate from him, for it burns at the heart of the world. But perhaps the most startling reference to the fire lies in a comment about the world after the end of days, when “the themes of Ilúvatar shall be played aright, and take Being in the moment of their utterance…and Ilúvatar shall give to their thought the Secret Fire.”
And the choir that is to sing the themes of Ilúvatar after the end of days does not consist merely of the Ainur, or even the Elves, but of all the Children of Ilúvatar, both Elves and Men.
Would Ilúvatar truly give the Flame Imperishable to the work of mere mortals? Could the stories of Men be given existence in the same plane, the same reality, as the authors?
Such a concept is too hard to grasp. Can you imagine walking with your characters as you walk with your parents or siblings? If you knew that someday, somewhere, your words were given the Secret Fire—that everything you wrote came to pass exactly as you foretold—how would that change your writing?
Posted by Mary Ruth Pursselley at 7:06 AM No comments:

Labels: You Ideas and Inspirations, The Writing Life 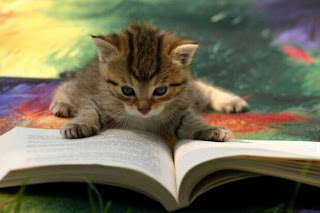 Imagine that someday, a person will be moved to tears by something you have written. Someone will laugh delightedly at the antics of a character who was born of your imagination. Someone will be inspired to strive for greatness by the heroes and heroines in your story.
Someone will stay awake until some ridiculous hour of the morning (even though they have to get up and go to work later) because they just can't put your book down. Someone will be waiting at the bookstore door when it opens on the day that your next book hits the shelves. Someone will stand in line for hours for the chance to meet you and get their copy of your book signed.
Someday, someone will look up at you, and at how far you have come in your journey, and will be encouraged to keep trying even though it is far from easy.
Today, write for that person.
Posted by Mary Ruth Pursselley at 8:40 AM 6 comments:

Labels: You Encouragement, The Writing Life

Look at the positives!

We writers love to complain. Read any writer's blog or website (and yes, I'm as guilty of this as the next person) and you're certain to find at least a few posts bemoaning the trials and hardships of writerhood.
I won't say that the life and career of a writer isn't tough at times. We writers are vulnerable to many problems and disorders that 'normal people' simply don't have to deal with - Writer's Block and Creativity Overload being two of the most common. However, I am convinced that the leading cause of stress and misery in the life of a writer is a case of Martyred Starving Artist Syndrome.
Yes! Writer's Block is miserable. Yes! it is overwhelming when ideas are pouring into your head literally faster than you can write them down. Yes! it is frustrating when the poem you spent hours agonizing over gets rejected ... and rejected ... and rejected. Yes! it is miserable when you spend hours fighting with a story scene trying to get it right and you're still not pleased with the result.
But there are positive aspects of writing too - positives that far outweigh the negatives! And yet do we hear about those even half as much as we hear about the negatives? Hmm?
So we here at The Lair are going to change that. I'm not going to deny or ignore the negative and difficult aspects, but I'm not going to give them center stage either. The Writer's Lair is a place for writers to come to encourage and be encouraged - not to bewail their pitiful misfortunes.
This is a big job - there are a lot of Christian writers out there who could use some godly encouragement - and I don't want to be doing it all on my own. The next few posts are going to be focusing on the glorious positive aspects of writing that we writers often tend to overlook, and you all are welcome (and heartily encouraged) to leave your feedback in comments. Also, feel free to drop me a line sharing your own message of encouragement to other writers, or your idea for an encouraging post, using the contact info on the lower right side of the screen.
I'll end this post with asking you all: What is the one thing that you love the most about being a writer? Can't wait to hear your answers!
Posted by Mary Ruth Pursselley at 9:27 PM 2 comments:

I sometimes think that I over-populate my novels. For the most part it seems okay, until I have three critical scenes happening in three different places across the story world, with six or seven different characters involved. And then even when I do get through that part, there are ten other characters that I have to catch the reader (and myself) up on.
The up side to that though, is the fun of naming everyone and everything in the story. Monica Wood, in her book The Pocket Muse (I forget if it was Volume I or II) talks about the fact that in 'real life' we might get to name a few pets, a few kids, maybe a business. But in our writing, we get to name everything! And it gets even better for us as fantasy writers, because not only do we get to name everything, we get to make up the names as well!
However, when you have a long cast of characters in your book ... and six more books to follow in that series ... and a related series of six more books ... and another related series of twelve books (just kidding, but you get the idea) it can sometimes get hard to make up names for everyone and everything.
Personally, in my writing I don't feel like every name of every person has to be a 'fantasy name' (for lack of a better term). I do have some, as my mom calls them, 'normal names': Ivan, Gabriel, Cyrus, etc.
But in order to really capture that fantasy feel, nothing does it like a good cast of exotic-sounding names. So where do you, the fantasy writer, come up with these names? Here are some of my favorite sources and methods.
~Typos. My friend Heather and I often discover cool misspellings/newly invented words in the emails we frantically pound out to each other.
~The Bible. In the back of his Bible, my dad has a list of all the proper names of places and people in the Bible. You would not believe the number of cool names you can come up with from there.
~Old baby name books. The older, the better.
~Foreign words. These days it's easier than ever to find instructions in six or seven languages on the backs of packages in the grocery stores. Read them! You might not want to use the word itself as it appears, but you can take it as a base and spin a name off of it. Nobody will know or care that your character's name is a derivative of 'shampoo' in Swedish.
~New spellings for common names. Take a common 'normal name' and give it a completely new spelling. Examples: Leah = Lhia Eddie (short for Edward) = Etti (short for Ettimer).
~Word games. Take the first common name that comes to your mind (longer names work best). Replace the third letter. Remove the fifth letter. Add two letters between the first and second letter. Pick a syllable and use it to replace the last syllable. Replace the first and second letter... you get the idea.
How about you? Where do you come up with names for the people and places in your fantasy worlds?
Posted by Mary Ruth Pursselley at 8:33 AM 2 comments: