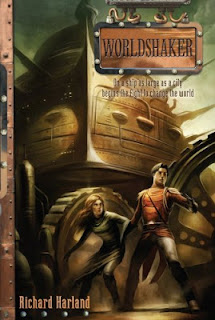 I was very unsure when I first picked up this book at the library. A book I'd never heard of, from an author I knew nothing about, in a genre that's still considered cutting-edge and somewhat experimental... but, I figured, it's just the library. I can always bring it back if I don't like it.
To my delighted relief, however, I loved this book!

At 16 years old, the main character Colbert Porpentine knows nothing about anything outside of his highly sheltered and controlled Victorian life on the upper decks of the massive juggernaut Worldshaker. When he's told that the 'Filthies' who live in the bottom decks, 'Below', are mindless, animal-like creatures with no emotions, no capacity for intelligent thought, no ability even to speak or understand speech, he believes it. When he's told that the 'Menials' - slow, speechless creatures who serve the upper classes - are Filthies who have been improved with intense training, he believes it. His whole life consists of social functions, and training to succeed his grandfather as Supreme Commander of the Worldshaker.
Until a Filthy escapes and accidentally finds her way into his life. Amazingly, she can speak and think and learn, and she seems completely human. What else has Col been told that isn't true?

Honestly, I couldn't put this book down. From beginning to end, it kept me eagerly turning pages and didn't get boring a single time. The action and character development are great, and the story has a thrilling plot as well as a great message, all in an amazing steampunk setting the likes of which you've never seen before. But on top of that, there is the added delight of a story that contains absolutely no language, and no inappropriate scenes. There was one scene that was the slightest bit suggestive, but the suggestiveness lasted for maybe two sentences, literally, and as I said, it was very slight.
The only thing I can say that would come close to a complaint would be the dark, brutal violence of the story. The darkness itself, I don't have so much a problem with because of the message of the story. You have to have darkness to show light, after all. But the violence towards the end of the book, as things started coming to a head, was very brutal and bloody in places, which I didn't like. I understand that realistic violence is bloody and brutal, but we all know that. We don't need to see it in technicolor.
The only other thing was the few instances in which some of the non-central characters seemed to make choices for which there was no prior suggestion in their character. The readers are left with a little bit of the where-did-that-come-from? feeling, since we were given no reason to think a particular character had it in them to make that particular decision. (I can't give specifics lest I give something away.) But it wasn't an overpowering thing, and I was able to enjoy the story in spite of it.
I would definitely say that Worldshaker is a book for older readers, simply because of the violence factor. Otherwise, a great read that I really, really loved!
Posted by Mary Ruth Pursselley at 1:00 AM 2 comments:

In the words of Mark Twain...

..."The reports of my death have been greatly exaggerated."

I know, it's been an unforgivably long time since I've posted, and I'm sure a few of you have wondered where I've been. My sincerest apologies, dear readers. Honestly, I have no idea where the last few weeks have gone; it's all been one mad whirl.
I am going to strive to do better in future, though. No promises, but I'm going to try.

For now, I have a fun announcement, brought to you by the lovely ladies over at Charlie and Me.
It's a Sherlock Giveaway! 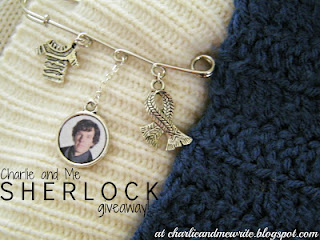 My dear friend LoriAnn has recently gotten me hooked on BBC's show Sherlock, and while I can honestly say that I am nowhere near being as much as addict as she is, I am still very much a fan. So this giveaway is quite an exciting event for me.
If you're interested, Click Here to read all the exciting details. The girls at Charlie and Me have really made their blog a great hangout spot for writers - full of laughter and writer-centric fun. I love reading their posts, and I would heartily recommend them to any Christian writers in need of a little light-hearted encouragement.
So get on over there and check out the giveaway!
Until next time,
Mary
Posted by Mary Ruth Pursselley at 4:58 PM No comments:

Labels: You Giveaways, Just for Fun

A New Year of Writing, Reading, and Blogging

Hello again, everybody! It's been a long, wonderful holiday vacation with my family, but I'm ready to get back to work on a lot of exciting plans, goals, and dreams for 2013. (Which reminds me, congratulations to everyone who survived the end of the world on the 21st. We should all get t-shirts: "I survived the end of the world!")
So I thought for my first post of the new year, I'd share a basic rundown of my plans and goals. Most of you have been hanging around the Writer's Lair long enough to know that there are three things that make me tick as a writer, reader, and blogger: Fantasy, Science Fiction, and Steampunk. (Not necessarily in that order.) And that's exactly what is (Lord willing) in store for 2013.

In the Science Fiction department: I'm setting a goal to have at least the first draft of my novel Empathia's Hope, a spinoff/expansion of the stories I've been publishing on Avenir Eclectia, finished by spring. How long it will take to edit, tweak, and polish, I have no idea, but I'm going to try to take things one step at a time. The character arcs and relationships in this story are really taking off and surprising me with how they're developing, and I'm really excited to get it finished.

In the Fantasy department: Once the first draft of Empathia's Hope is done, work begins on A Traitor's Prayer, the sequel to Son of the Shield. I'm not setting any kind of official goal date for that yet, but I'd like to at least be started on it by summer. ATP is another story that's been continually surprising me with the twists and turns it's taken as I've been developing it in my head. After working on SotS for five years, getting away from the series for a while has been wonderful, but I'm more than ready now to return to the world of Reyem and the wonderful characters who live there, for more of the exciting adventures that made SotS such a joy to write!
Also in the Fantasy department of plans for this year is the hope of securing a publishing contract for Son of the Shield. Of course, whether or not that comes to pass is ultimately out of my hands, but as I said, here's hoping.

In the Steampunk Department: Those of you who have read Falls the Shadow over at The Lost Scribes will be happy to know that the sequel, Burns the Fire, is set to go live April 1st, 2013. That's just three months away! My co-authors and I have been hard at work (and having a ball) with developing new ideas and starting work on chapter drafts! ; ) Honestly, we were kind of surprised at the enthusiasm with which Falls the Shadow was received, considering how new and relatively obscure the steampunk genre of fiction still is, but we're having a blast rolling with it! Keep an eye on the Lost Scribes blog for teasers, sneak peeks, and more cool stuff in the meantime. For now just let me say that the characters, relationships, action, drama, intrigue, and steampunk awesomeness that you loved in Falls the Shadow are being taken to a whole new level in Burns the Fire. That's all I'll say. That, and a promise that I will try to make sure that the chapter that goes live on April 1st this time around is a for-real chapter, not one of my co-authors' cruel and maniacal April Fools concoctions designed to freak out and torture readers. (Not that that was directed at anyone, Elynn!) : P
We're also starting to talk about getting the first draft of Falls the Shadow edited, polished, and expanded a little bit in the hopes of getting it published officially - as in, in print, available to own and read on paper! We'll see what God has in store for us on that front.

And of course, I have a huge list of books I plan to read in 2013, and lots of other dreams, some small, some big, that I would love to see come to pass this year. But we'll have to wait and see. As my friend LoriAnn told me in an email just a few days ago:

It's going to be a great year!
Posted by Mary Ruth Pursselley at 1:00 AM 2 comments: