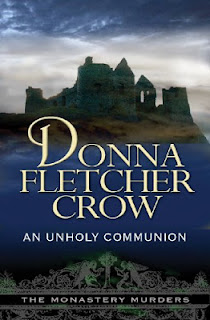 Lately I've been trying to branch out a little more in my reading - as in, get a feel for genres of Christian fiction that fall outside my normal preferences. I figure I should at least have some knowledge of them, even if they aren't what I enjoy. So far I've found a pretty good mix - things I loved that I wasn't expecting to, and things that made me think "Oh - that's why I don't read that genre."
I'd never even heard of the genre "Clerical Mystery" before I started reading this book, but since the author is stated by critics to have "found her own niche" within the genre, I suppose it must be pretty popular. Unfortunately, in my opinion the author's particular "niche" isn't a very exciting place to be.
I honestly have to say that this was the slowest book I've read in years - maybe ever. The plot felt aimless, meandering around the Welsh countryside with no particularly pressing goal. Part of that was no doubt due to the extra weight of descriptive details bogging it down, and part was probably due to a general lack of tightening and streamlining on the parts of the author and editors. But I think most of it was really due to the slowness of the characters themselves. I'm sorry, but these modern pilgrims simply weren't too bright.
"Let's see, we're definitely being followed on our little pilgrimage by some kind of demonic force that, so far, has managed to make a disaster out of everything we attempt, and has put all of us at risk at one point or another. But I'm pretty sure it would be okay for these two teenaged members of our group to go up the mountain and explore that cave by themselves."
Really?
And I understand the whole beauty-in-the-eye-of-the-beholder thing, but the readers should at least be able to see some of what characters see in one another. While Antony is fawning over Felicity's "quick mind", I'm sitting here thinking "Girl, did you just figure that out?" And while he gushes over her courage and grit, I'm trying not to yell "Seriously, cowgirl up, sissy girl!" The same could be said about Antony - while Felicity is melting over him, I'm left thinking "Seriously, no real man is going to be worried about tearing his clothes while climbing around looking for a hidden treasure, just as no real man is going to even think about the wooden box he's smuggling out under his shirt 'chafing his skin'."
All of which made their romance seem very mushy and sappy, even though it wasn't written in a style that normally creates that effect to that extent.
There were two home-schooled characters in the book, which you don't see very often, but I was rather put off by the fact that they were also the only two Goth-dressing, Twilight-reading, death-obsessed, pagan characters. This being the only thing I've read by this author, I don't want to get too stirred up about it - it may or may not be intended as a slight against homeschoolers - but it was still enough to get my hackles up.
Then, of course, there was the religion issue. At first, most of the evidence made me assume the characters were Catholics, but there were things that didn't quite add up if that was the case. So I showed it to a close friend who is a Catholic, and she didn't think it added up either. There were a couple of references that suggested the characters were Methodists, but I have Methodist friends too and they don't practice the rituals and so forth that were so prevalent in this story. So I really have no idea what religion these characters are supposed to be.
There were also some editorial issues - incorrectly used words or incorrect forms of words used, and a scene in which Felicity borrows a dress from one girl and then returns it to a different girl - which always bother me.
There were some good points about it - lots and lots of gorgeous descriptions of the settings, countryside, and local food, for instance. And, personally having a Welsh surname that confuses everyone with its double letters, I had a lot of fun looking at all the Welsh names in the book - double letters everywhere! : D
But on the whole, my first experience in the "Clerical Mystery" genre was less than a hit.

I received this book free of charge in exchange for my review.
Posted by Mary Ruth Pursselley at 6:00 AM 2 comments:

Realm Makers - the moment we've all been waiting for!

Christian writers, get ready for a history-making event:

On August 2-3, 2013, writers, editors, and publishers from around the world will be gathered at the University of Missouri, St Louis, for the first-ever Realm Makers conference - a writers conference for lovers of the question "what if?", whose faith is the top priority.

Click Here to visit their homepage and get all the information you need.

I am so excited about this, I don't know how I'm going to keep it together until August. Grace Bridges, leading lady of Splashdown Books, is going to be there, as are spec-fic pioneer Jeff Gerke of Marcher Lord Press; Chila Woychick, editor of Port Yonder Press; L.B. Graham, author of the Binding of the Blade series; Kathy Tyers, author of the Firebird trilogy; and more! (And of course, for those who may care, you can meet me too! ; )
There's also going to be a costume ball on the first night of the conference, which promises to be absolutely fabulous!
If you register before June 1st, you can take advantage of an early bird discount. Registration costs go up after that, so no dilly-dallying!