Book Review: City of the Dead 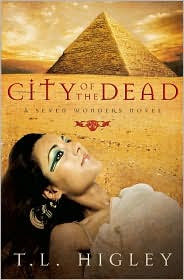 Book Two in the Seven Wonders Series by T. L. Higley.
I'll be honest, the cover made me a little edgy when I first saw it. It kind of had that 'romance novel' look to it, and I am really not into romance novels. Rest assured, dear readers, this is not a romance novel! Yes, a romance does develop between two of the characters over the course of the story, but ... well, that's different.
Anyway, the main character, Hemiunu, or 'Hemi' to his friends, is Grand Vizier to the pharaoh Khufu, and the designer and architect for the Great Pyramid at Ghiza. He and Pharaoh Khufu grew up together, and both are hiding a dark secret regarding the mysterious death of a young woman many years ago, when they were still boys. Both of them are hiding the secret, but neither of them actually knows the full truth of it...or so they claim.
When Hemi's friends start being murdered, he begs Pharaoh for permission to investigate, but uncovering the murderer may mean uncovering the truth of an event they have both sworn to keep secret forever. It also leads Hemi to meet some new and surprising people who introduce him to a God other than the statues he serves in Egypt's temples.
This books makes a fabulous read; it combines an historical adventure with a delicious murder mystery. The only problem I found with it was that it is written in first-person from the viewpoint of a man. Being written by a female author, I think it sometimes doesn't accurately reflect the way a man would view or think about a given situation. But, the character development is deep and thorough, and we the readers get the feeling that we know Hemi personally.
City of the Dead gets a great rating from me (in which case, I should probably develop some sort of rating system to go by) and I will definitely be adding it to my bookshelf at my first opportunity!
Posted by Mary Ruth Pursselley at 9:48 AM