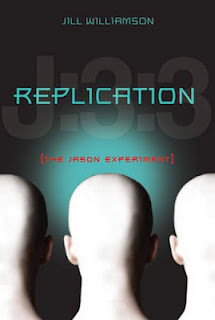 By Jill Williamson
Published by Zondervan

I've never won a blog book-giveaway before winning this one, and I was thrilled to receive a copy, signed by the author!

Martyr - or, J:3:3 as he's officially called - lives in a state-of-the-art facility deep under ground, safe from the toxic air of the dangerous world above. A few weeks before his eighteenth birthday, he's about to expire - his life will end, a sacrifice that will provide the much-needed antidote for the people trapped above ground in the hostile environment.

Out in that 'hostile environment' is Abby Goyer, a brainy high-schooler looking towards studying forensics in college. Her father works for a science lab in Washington D.C, and their relationship has been pretty strained since Abby's mom passed away. The strain becomes even worse when Mr. Goyer announces that they're moving to Alaska, where he's taken a job at a state-of-the-art research lab.

I have to say, I loved this book. The characters were all remarkably well-developed - even Martyr, who naturally has some peculiarities from living in an underground laboratory his whole life. The plot was straightforward and clear-cut, another plus. (I occasionally get tired of plots with so many twists and turns that by the end you can't even remember what the initial point was.) The writing was very skillful, another huge plus.
In this story, the author dealt with the highly controversial issue of cloning with skill, honesty, and grace, which I found highly refreshing. She doesn't mince words, and she calls things what they are, which I admire, but she did it all without sounding in the least 'preachy' or militant about it.
One or two things that bothered me:
First, there were several kiss scenes between teenagers. They were nothing humongous or grossly over-the-top, just straightforward kisses, but they still bothered me, since both characters were Christians.
The only other thing is a pet-peeve annoyance for me, more than anything else. The character Abby - who has studied crime for years and should know better - lets herself get pushed around very easily by a guy from her school who follows her around uninvited and even ends up forcing his way into her house. Abby isn't happy about it, but she doesn't do anything about it. There were several instances in which she should have thrown the creep out of her house at knife-point and called the cops on him, but she did nothing. It made me highly irritated at her.

Aside from those two little issues, though, I really, really enjoyed this book. I honestly couldn't put it down - and it takes a special book to captivate me that completely. I wouldn't recommend this book for younger readers, certainly. But for anyone 16 and up, this would make a fantastic read. I definitely recommend that you check it out at the first opportunity you get!
Posted by Mary Ruth Pursselley at 6:00 AM