A Call for Christian Writers to be Bold with Their Message

I have a love/hate relationship with the TRON movie series. 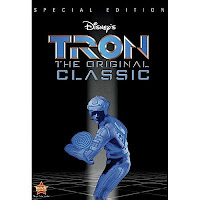 I saw the original (1982) TRON and loved it. The thing about it that most impressed me was the scene where a bunch of characters (characters in this case being computer programs) are debating whether the Users (the humans who wrote them) exist or not. Users are viewed as gods of a sort, since they are the ones who created the programs and established the rules programs are supposed to follow. Some programs, however, have decided the Users don't really exist, or that they're just tyrants out to enslave everyone. So it's almost like an allegorical theist versus atheist debate.
At one point one of the programs is asked whether he believes in the Users or not.
"Of course I do," he replies. "If I don't have a User, then who wrote me?"
And at that point I'm ready to jump out of my seat and cheer. Yes! There! It's right there in front of you, people! You've got it!
And, over the course of the movie, it is established that the programs who believe in and obey the Users were right all along. What a message - and in a secular movie, no less!

Then I saw the 2010 sequel, TRON: Legacy. And while I give it very high marks for amazing graphics, great action scenes, wonderful characters, and a killer good soundtrack, I must admit I was disappointed in the moral of the story.
In Legacy, the rebellion against the Users is still going strong and gaining strength and momentum as the programs strive for a perfect computer system. Unfortunately their perception and understanding of perfection is skewed, and their pursuit of it results in violence, chaos, and oppression.
Into this mess walk the Isos, a type or 'race' of programs who are, essentially, perfect. But because the other programs' idea of perfection is inaccurate, they see the Isos as an imperfection and proceed to wipe them out in a digital version of the Holocaust.
When the main character learns about the existence of the Iso programs, he asks his father about them, wanting to know who wrote them.
His father's response is "No one wrote them. The conditions were right, and they just came into being."
Splat! A bucket of cold water, dumped on all my high hopes for more of the same great message as the prequel. We go from the 'creation must have a creator' message to 'things can just pop into existence all on their own, and look! they turn out better than the things that did have a creator!'
As my friend LoriAnn occasionally puts it: *head-desk, head-desk, head-desk*

I know, my hopes were probably a bit too high, but I was still disappointed... or perhaps infuriated would be a better word.
But in a way, that's good. Answers in Genesis founder Ken Ham talks about visiting secular museums that promote the theory of evolution as being bad for him because it makes him furious, but good for him because it makes him even more bold in proclaiming the message of creation and the Gospel.
That's how I feel when I see things like this in movies and fiction. I'm furious at the kind of morals and messages being promoted, but I'm inspired to be that much more bold in delivering a Christian message through my own writing.
And that's what I would love to see more Christian writers doing: standing up and being bold with the message God has given them. Secular Humanist morals, messages, and agendas are woven into every secular piece of fiction or other entertainment out there. Christians, let's be bold, deliberate, and determined in declaring our own message through our writing.

What inspires you to be bold?
Posted by Mary Ruth Pursselley at 5:19 PM