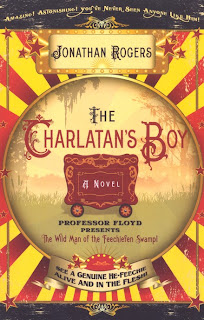 Over the weekend I managed to severely burn my finger and was on limited activity as a result, so I was thrilled when this book arrived and gave me something to do. And if laughter really is the best medicine, my finger will be healed in no time.

The Charlatan’s Boy stars Grady, a pitifully ugly boy who travels the country of Corenwald with Floyd—a professional flimflam man. Grady’s ugliness makes him perfect to play the part of a feechie (the wild little savages the people of Corenwald believe inhabit the swamplands), and he and Floyd make a handsome living off of people who are curious to see “a genuine he-feechie; alive and in the flesh!”.

But as the people of Corenwald gradually stop believing in feechies, times get tough for Floyd and Grady, and they’re forced to find another way of making a living. The book follows their hilarious string of schemes and escapades, including an “Ugliest Boy in the World” routine and a stint in the phrenology business. Alas, nothing seems to work as well as the feechie trade did, back when people believed in feechies.

So, Floyd and Grady decide to cook up another great feechie scare, something to revive the old beliefs in feechies and put them back in business. Unfortunately, as the scare gets underway they realize that they aren’t alone. It seems every huckster and charlatan in Corenwald wants in on the excitement, and before long they’re all claiming to be the only act of their kind, the only one to have a genuine, captive feechie.

If Mark Twain had written fantasy, The Charlatan’s Boy could have easily passed as his work. The settings, the characters, the language and grammar used, and the unique style of humor work together to create a one-of-a-kind fantasy read like none you’ve read before. This is a book to be read aloud in the family room in the evenings; it had me laughing out loud from start to finish.

The plot had a tendency to meander from time to time, but in my opinion that didn’t hurt the book a bit. In fact, I think it only added to the lighthearted and refreshing effect of the story. This was my first time to read anything by Jonathan Rogers, but you can be sure that after this I will be checking out more of his work, including the sequel to The Charlatan’s Boy, slated for release this fall!

I received this book free of charge from Waterbrook Multnomah in exchange for my review. A favorable review is not required; Waterbrook is committed to gathering honest opinions about the books they publish.