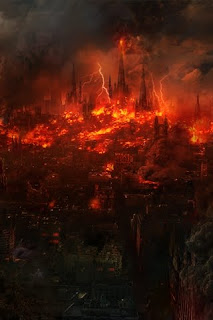 A speculative genre that seems to be growing at an inordinate rate these days is the Post-Apocalyptic genre. And everyone has their own ideas of what exactly 'the Apocalypse' will be like: from movies and books like 2012, The Book of Eli, One Second After, I am Legend, Lucifer's Hammer, and The Road, everyone is bringing their own presentation of the end of the world to the table.
Of course, as with many popular buzzwords, the term 'Apocalypse' has become warped in its definition by overuse. Webster's Dictionary defines 'Apocalypse' as: 1) the last book of the New Testament; book of Revelation. 2) a prophetic disclosure; revelation.
Seems cut and dried, right? Apocalypse=the end of the world, or a revealed prophesy. Unfortunately, due to gross overuse, the 'Apocalypse' has come to refer to any huge disaster--and sometimes even not-so-huge disasters. Back in January a blizzard plowed through my area, dumping eighteen inches of snow on us. Granted, here in the Ozarks it's pretty unusual to get a snowfall that big, but still--it was only eighteen inches. And yet I heard multiple people referring to it as 'The Snow Apocalypse'. (Seriously? If a little snow constitutes the Apocalypse in your book, what are you going to do in the event of something really disastrous? But I digress.)
The Post-Apocalyptic genre brings a lot of unique elements to fiction: the possibilities for nuclear weapons, asteroids, world war, inter-planetary war, and world-wide cataclysm to name a few. Any of those elements could hold a lot of possibility for a writer willing to make it work. Unfortunately, the genre often drags a lot of very dark, dystopian elements onto the stage with it too. Human beings degenerated to the point of utter brutality, cannibalism, widespread human trafficking, and the ever-popular zombies all pop up frequently in works of Post-Apocalyptic fiction.
These issues, along with the very nature of 'Apocalyptic' fiction, can make it a tough area for Christian writers. Sure, I've heard the arguments for pursuing realism in fiction, but the point remains that as Christians we know the real Apocalypse will be when Christ raptures His church and unleashes the tribulation on the earth (and the Left Behind series has pretty much cornered, captured, skinned, and filleted that market; let's not beat that dead horse any more!).
What are your thoughts on Post-Apocalyptic fiction? Do you think it has possibilities (aside from Left Behind spinoffs) in the world of Christian fiction?
Posted by Mary Ruth Pursselley at 9:27 AM

Labels: You Godly Writing, My Writing, The Speculative Genres