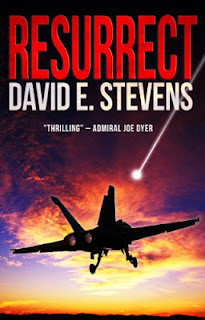 I wasn't entirely sure what to expect from this book when I requested it, since I don't have a lot of experience with this genre. But I have to say, it kept me engaged and intent from the first to the last page. The author doesn't waste a minute getting to life-and-death action, and rarely stops for a minute for the rest of the book.
In all honesty, were it left to me I wouldn't categorize this as a 'Christian' book. Sure, one of the central characters claims to be an 'Evangelical Christian' (though she doesn't exactly behave like one), there are a few references to faith and spiritual issues throughout, and I expect that the author is probably working towards some kind of faith-based conclusion over the course of the trilogy as a whole, but by itself Resurrect comes across more as just a good action/thriller. Not that I have a problem with that, per se, it's just something that I think readers ought to be aware of.
This book was very frank and no-nonsense in presenting the facts, which makes for a very clear and vivid read... though at times it got a little overly frank for my personal tastes. Some parts of it were also a tiny bit over-technical, leaving me feeling a little like a deer in the headlights, but I was always able to follow the important facts of what was happening. (I do have to mention, though, that I was greatly disappointed when the author - who should know better - called a magazine a 'clip'. Ach!)
But on the whole, this book was a thrilling, edge-of-your-seat adventure from start to finish. Let me know when they decide to make the movie! Seriously, in spite of the few overly-frank moments, there was nothing that I considered unclean or indecent - even when one of the characters takes off on a profanity-laced tirade, the author simply says that he 'let loose a string of expletives' without reproducing any of them. You have to admire an author with that kind of taste. And the humor sprinkled throughout the book was absolutely delightful.
I wouldn't recommend the book for young readers; it was definitely intended for an adult audience. And, it did rather end on a cliff hanger. But I've already recommended it to my 21-year-old brother, and personally I'm looking forward to the rest of the series!

I received a copy of this book free of charge in exchange for my review. A favorable review was not required, and my opinions are entirely my own.
Posted by Mary Ruth Pursselley at 3:31 PM