Movie Review - The Hobbit: An Unexpected Journey! (And a Giveaway)

*Warning: May Contain Spoilers! If you're interested in the giveaway, but don't want to read the review, just scroll down until you see bold font.*

While I wasn't able to go to the midnight premier as I had originally hoped, I was able to go see The Hobbit on its second day in theaters. Definitely the earliest I have ever gotten to see a newly-released movie. I hope I don't get uppity...
But enough of that! I'm sure you're all dying to hear my erudite and witty opinions of the film, right? (Or, more truthfully, I've already exhausted my entire family with my ravings and swoonings and shriekings and carryings-on and just need someone new to blather to.) 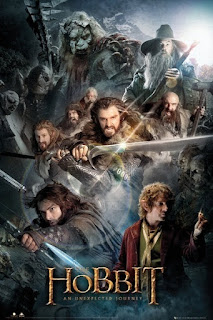 I was rather uneasy about the whole idea of The Hobbit being made into a trilogy of movies, and apparently my unease was shared by quite a few people. But after seeing An Unexpected Journey, I am no longer worried in the least.
There was quite a lot of filling in and fleshing out done, with a few additions that weren't in the book, but in my opinion it didn't harm the story in the least. (Like the air raid scene at the beginning of the movie The Lion, the Witch, and the Wardrobe - it just helped ground the story and set up a rich, well-developed stage.) And, it's going to make for an absolutely fabulous trilogy of movies!
Much of the additional material ('additional' meaning 'not in the book') was for the purpose of setting The Hobbit up more solidly as the prequel to the Lord of the Rings trilogy, making it a little easier for viewers to see how events are leading up to the War of the Ring. There were plenty of fun references and remarks included, too, that are only meaningful if you've seen the Lord of the Rings movies or read the books, which makes it fun.
There were other things added or expanded upon too, most of it for excitement and/or action purposes. For instance: for a resident of Middle Earth, it's perfectly natural that you should have a pack of orcs hunting you for no other reason than you tromped through their territory. But for a movie viewer, it's more exciting if the orc leader has a long-harbored grudge against the leader of your party and is hunting him down for vengeance. As I said earlier, I don't think it harmed the story at all.
I have to say, in spite of how many times I've read The Hobbit and The Lord of the Rings, I never really grasped just how cool dwarfs could be. I absolutely love what Peter Jackson and the production team have done with the dwarf characters in this movie (and I'm totally going to have to write a story about dwarfs now!). And of course, the hats must go off to the actors who have done such amazing jobs with their roles!
I have this thing about dark, brooding characters, so naturally Thorin Oakenshield had my full attention from the get-go. But I also love the light-heartedness of the brothers Fili and Kili, which they blend perfectly with their skill as warriors. Oftentimes in characters of that type, one side is overdone while the other is left wanting, or else the transition from 'fun' mode to 'battle' mode seems awkward and unnatural. Not so with these two. They make it perfectly natural, and in fact remind me a little bit of my own brothers. : ) And of course, what's not to love about sweet, unassuming Bilbo Baggins? I love, love, love the honesty and sincerity that Martin Freeman has brought to his character, blended so well with Bilbo's feelings of inadequacy as a member of Thorin's party. 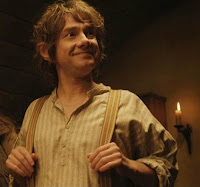 And Bilbo's speech at the end of the movie... one that wasn't in the book but is so good that it could have been... just made my heart melt. Gotta say it.
The cinematography of the movie was just as amazing as it was in the Lord of the Rings movies - sweeping landscapes that leave you totally convinced Middle Earth is a real place that is out there somewhere, panoramic shots of mountains, amazing CGI settings and graphics, and great action shots and sequences. There was just one kind of weird, distracting thing I noticed, when the dwarfs have all been captured by the goblins and the goblin king is taunting Thorin. The camera is cutting back and forth between them during their exchange, but every single time it cuts to Thorin his head is down, and he's slowly raising his eyes to fix the goblin king with a withering glare. Don't get me wrong, he's got glaring down to an art and the whole slowly-raising-his-eyes-which-are-blazing-with-hatred thing made for a great shot... the first time. The third and fourth times, it started getting a little weird. Probably just an editing error, and really nothing that even matters in light of the rest of the movie's sheer and massive epicness, but I thought I'd mention it anyway.
And the soundtrack... oh, the soundtrack! I had chills listening to the dwarfs sing 'Misty Mountains' around Bilbo's hearth, the battle music was amazing, the Ring theme came in at just exactly the right moment, and the Shire theme (also coming in at exactly the right moments) was as heart-tugging and beautifully sweet as ever.

Which brings me to the second part of this post: The Giveaway!
The Ink Slinger is having a giveaway of The Dark Knight Rises and The Hobbit: An Unexpected Journey soundtracks, and you're invited to enter! I'm not familiar with The Dark Knight soundtrack, but it's by Hans Zimmer so it has to be amazing. And I am here to testify that the Hobbit soundtrack is one you will definitely want to add to your collection. So Click Here and get over to the Ink Slinger to enter the giveaway. And if you haven't seen The Hobbit yet, get thee to a theater and do so with all haste!