Artificial Intelligence - How far can Christian fiction take it? 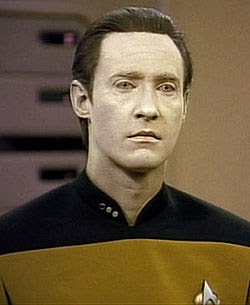 Science fiction often includes some form or other of artificial intelligence. Usually it's just a highly advanced machine programmed to process information and make basic decisions based on that information.
But in a few cases, especially more recently, an interesting little trend pops up that I think merits attention from the Christian fiction world.
That trend is mechanical evolution. Basically it involves a machine so advanced and so highly developed that it begins to 'evolve', becoming sentient and sometimes even emotional.
Data, from Star Trek: the Next Generation, is a prime example. For those among my readers who aren't 'Trekkies': Data is an android, a one-of-a-kind machine so highly developed that he actually holds a position as an officer on board the ship Enterprise. Throughout the series, Data (and others) struggle with his identity, whether he is just a highly developed machine, or has become something more. Data even expresses his desire to become more human, though his inability to understand human emotion creates some considerable (and hilarious) difficulties.

Another example is Sonny, from Isaac Asimov's I, Robot. Unlike Data, Sonny has evolved emotions and even a sense of right and wrong. For all practical purposes he's a human made of metal. 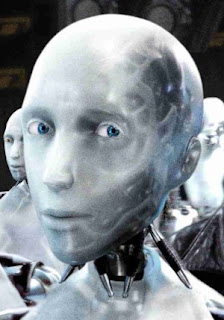 The movie Stealth features Edi, an unmanned, autonomous fighter jet who begins acting outside the bounds of his programming. While trying to learn the reason behind this, the main characters discover that Edi has evolved emotion and self-awareness. At the end of the movie, Edi ends up sacrificing himself, flying kamikaze-style into an enemy ship to allow the human characters to escape.

I'll be honest: I am a Trekkie, and Data is definitely one of my favorite characters. And artificial intelligence does make for some intriguing stories. But in the context of fiction that is purely Christian, how far can artificial intelligence be taken? If we allow the concept of highly developed machines evolving characteristics that are strictly human in nature (sentience, emotion, etc.), are we not giving credence to the idea that evolution is possible?
Genesis 1:26&27 tell us that man is created in the image of God. Genesis 2:7 states that God breathed into man's nostrils "the breath of life, and man became a living soul". So we know that sentient life - true intelligence - comes only from the breath of God Himself.
For the record, I find it extremely humorous that the only machines to evolve human qualities in fiction are the ones that are highly developed, advanced far beyond any technology that we have today. You never see a movie about a sentient, emotional robot emerging from the wreckage of a plane crash or a tornado in a junkyard. Even in fiction, design is necessary for life. [Who would have imagined such a thing? ; ) ]

What are your thoughts on Artificial Intelligence in Christian fiction?
Posted by Mary Ruth Pursselley at 8:40 AM