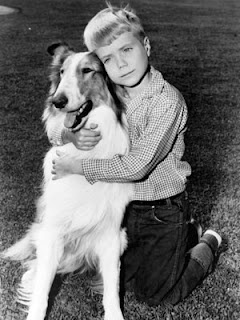 I want to start off by making it clear that I have nothing against children as main characters in fiction. I love them, in fact. The Chronicles of Narnia, The Secret Garden, Princess Academy, and Emily of New Moon are some of my favorite books, and they all have children as main characters. I think that in a lot of ways, children actually make better main characters than adults do, because adults can often make things more complex. Children are more straightforward, willing to see things just as they are without making them overly complicated.
However writers, I must plead with you on one point: if you are writing a child character, please make their adventures and exploits believable!
I'm sure everyone at some point or other has seen at least an episode or two of Lassie. The show could be a textbook for writers on how not to write a child character. If I had a child who got himself into half the trouble that innocent little Timmy manages to get into, he would spend his life in his room where at least there would be no landmines, hot air balloons, dynamite, cougar dens, wild boars, uncovered wells, burning buildings, nuclear weapons, or infectious diseases. And I would probably keep an eye on him myself, instead of leaving it up to the dog.
My point is, children can have adventures too, but writers need to be careful and make sure the adventures and the roles children play in them aren't completely beyond the bounds of realism.
I'm as guilty of this as anyone--or was, in some of my early stories. My mom harasses me to this day, every time I say I've got a new story idea, about "The poor fifteen-year-old girl who dreams of going to medical school but has decided to give it up and remain at home to care for her fourteen younger siblings since her father has been called away to war and her mother has been ill since the birth of the triplets and she must single-handedly care for the 3000-acre farm." In my defense, this is a shameless exaggeration on Mom's part. There were only eight younger siblings, no triplets. And the farm was only 800 acres.
Personally, I think that when C.S. Lewis wrote The Chronicles of Narnia he also wrote the textbook on how to put children into epic adventures as main characters, and do it well. I also see it as another exquisite layer of the Narnian allegory. With the exception of the cab driver and his wife in The Magician's Nephew, the only people ever to come to Narnia from our world are children. And remember what Jesus said about children and the Kingdom of Heaven?

What are your thoughts on children as main characters in fiction? Do you have any in your own writing? How do you go about putting them into extraordinary adventures believably?
Posted by Mary Ruth Pursselley at 9:58 AM