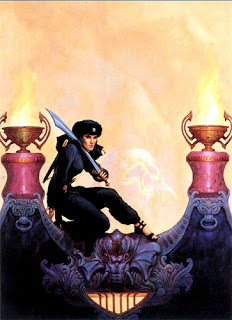 Part of the joy of writing in the speculative genres is the fact that we get to build whole worlds and cultures entirely from our imaginations. In my opinion, it's probably the most fun part.
But our imaginations have to have raw materials to work with, building blocks to use as foundations for our constructions, and that's what I'm going to talk about in this post.
Most fantasy fiction is set in a world/culture that is basically European in nature. Castles, knights, dragons, enchanted swords, elves, and fairies are standard fare, finding their roots in Western European history and legend. But there are lots of other exciting, colorful, mysterious, and intriguing cultures out there, all of which have tons to offer spec.fic. writers. Personally, I've become totally hooked on studying cultures that are foreign to me and storing what I learn for use in future fiction projects. I recently took a college course on ancient Chinese history, and now I can't wait to write a fantasy culture using some of the elements I learned about. My new ApricotPie fantasy serial does have a Western European flavor, but from the Victorian era rather than the commonly-used Middle Ages. Simmering on the back burner, I have fantasy stories based on ancient Mayan and Arabian cultures.
And there are so many more that could be used. Grab yourself a history book and start asking questions. What might a fantasy culture based on the Eskimo lifestyle look like? What literary possibilities await in the medicinal magic of the Australian Aborigines? What if the builders of the cave dwellings in the American southwest weren't Indians at all? Which might an elf prefer: the precision of the Greek parthenon, or the onion-dome style of St. Petersburg?
You might choose to take the route of historical fantasy. On the other hand, you might create an entirely new world. And remember, you're not limited to using only one culture from our world for one culture from your world. Mix and match! There are plenty of questions to be asked and speculated upon there, too. That's why we call it speculative fiction, after all.
What real-world cultures are your writings based on? In what cultures do you find the most possibilities for speculative fiction?
Posted by Mary Ruth Pursselley at 11:50 AM

Labels: You A bit of inspiration, Fantasy, Ideas and Inspirations, The Speculative Genres, World-Building