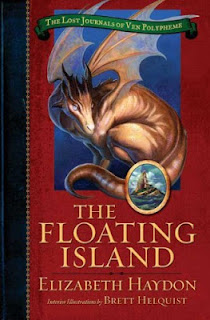 I stumbled across this book in the library last week and, in spite of the fact that I had never heard of it or its author before, I was intrigued so I picked it up.
The Floating Island is the story of Ven Polypheme, a young Nain (similar to a dwarf) boy who finds himself thrown into a 'series of unfortunate events', as it were. Being attacked by pirates, nearly drowned, threatened by unintentionally-made enemies, and forced to seek shelter in a haunted inn, are just a few of the mishaps that befall him along the way as he seeks to find his way home and, at the same time, satisfy his own insatiable curiosity and desire for adventure.
I really enjoyed reading this book. I must admit, I have absolutely no idea what the dragon on the cover has to do with anything in the story - a talking cat, or a mermaid, or even a ghost wolf would have been much more appropriate and applicable - but it was still a very fun story.
My one complaint was the part of the story that hinged on the cursed spirit of someone who was buried at a crossroads, and the characters' quest to bring the spirit rest in order to restore the magic of the land surrounding the crossroads. The magic itself didn't bother me that much in and of itself, because of the author's explanation that magic was a force or energy built into creation when the Creator (and yes, she capitalized Creator) made it. I was more bothered by the ghost character who came into the story, and by some of the ghost-related circumstances that arose, however. I won't say I would never let my kids read this book, but I would definitely wait to let them read it until they were mature enough to understand the true nature of ghosts and spirits and not be confused. I would let my 18-year-old brother read it without a second thought, but I wouldn't give it to my much more impressionable 13-year-old sister.
So on the whole, a very fun, lighthearted fantasy read, but one I wouldn't necessarily recommend for the young audience it was intended for.
Posted by Mary Ruth Pursselley at 4:33 PM