For this 'edition' of the Character Costume Challenge (started by Gillian Adams on her blog), I decided to dress as Orienne Seritan, the leading lady from my first novel, Son of the Shield. 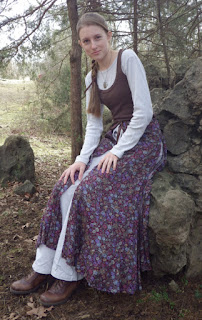 Orienne is a twenty-four-year-old Adelfian woman whose older brother, Allegar, is one of the six highest-ranking leaders in the nation. Allegar has been her only family since an epidemic claimed both of their parents years before, and Orienne travels with him everywhere he goes. Since this prevents her holding down a normal job, she volunteers at healers' wards (hospitals) wherever they're staying, and serves the Adelfian government and military in a diplomatic capacity when needed.
Orienne is a tough girl who can get down and dirty if she has to, but she much prefers peace and quiet. Her greatest dream is for the war between Adelfia and Moritar to end, and to settle down and start a family of her own.
She has dark brown hair, by the way, so just pretend my blond hair is brown. ; ) 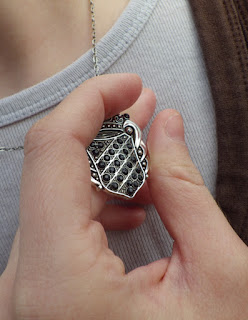 Orienne's shield pendant - a gift from her brother, that she wears everywhere, every day.
Normal Adelfian attire for a woman usually consists of a plain shirt with any of several variations of vest or overshirt on over it, and a garment the Adelfians call 'larrons' - basically a pair of pants with some kind of overskirt over it. There are plenty of styles and variations of these too; with the practicality of pants and the femininity of skirts rolled together, they help make any outfit both serviceable and tasteful.

"A lone mountain rose sharply from the center of the Basin, towering above everything for miles... And covering [its] slopes was Farindel. The tarekstone walls of the city's structures reflected the sunset's light, making Farindel look like a shining mounting or ivory." (from Son of the Shield)

I know, I know, but I just couldn't resist the temptation to replace the cows and bale rings I was actually looking at with at least a rough representation of Farindel (the capital city of Adelfia). The artwork I used for the background is not mine. I have no idea who the original artist is, but no copyright infringement is intended. 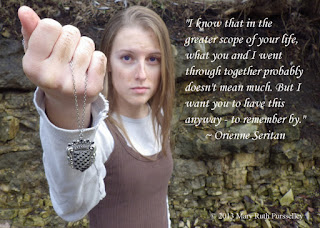 A mud-covered, purple-eyed Orienne after a very long and strenuous several days of being dragged through the mountains, fighting and running for her life, and experiencing crushing heartbreak. (Yeah... I'm not really nice to my characters.) 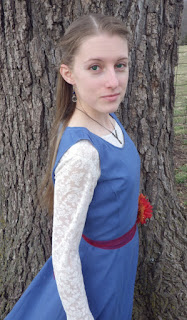 Orienne in much better circumstances, clean, rested, and happy. You might also notice that her eyes are now green. That's because the color of her eyes changes according to the emotion she's experiencing. There are seven basic colors that they turn, with variations and fluctuations depending on the circumstances. After all, whose emotions are ever completely clear-cut and unmixed? : P

For formal or special occasions, larrons get traded in for actual skirts or dresses. ; )
This is my representation of the outfit Orienne wears in one of the last scenes of the book - a huge, once-in-a-lifetime ceremony that she and the other main characters all get to take part in. By this time she's been through a lot physically, emotionally, and spiritually. It's been a rough journey, and she knows she will never again be the person she was before the journey began, but she's okay with that. She knows that the Shield is using every one of the events that have taken place for His glory, and she's coming to a place of accepting whatever she has to face as part of His plan... including the one last, daunting task still awaiting her completion in the very last scene of the book.

Well, that about wraps it up for this round of the Character Costume Challenge!
Very special thanks to my brother Caleb for hiking all over the place with me and taking all the pictures. You did an awesome job, bro!
Thanks once again to Gillian Adams, who is the reason we have the CCC in the first place.
And of course, thanks to all you loyal blog followers. I hope you've enjoyed this little look at a character I've spent so much time with over the last six years. (Yep, I said six! This month marks the sixth anniversary of the very first idea I had for Son of the Shield. Man, that's hard to believe!)
I had a ton of fun doing this, and I'm already looking forward to the next edition of the Character Costume Challenge!

Until next time,
Mary