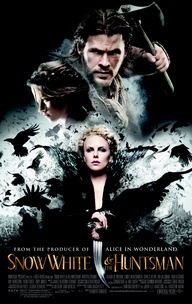 *Warning: Contains Spoilers*
Well, I finally got around to seeing this movie for myself, so the friends who've been telling me to for ages can now rest easy. : )
Fairytales can be very tricky to work with, I've learned, especially when it comes to fleshing them out so that the classic fairytale coincidences aren't so... well, coincidental (i.e. 'and then the prince just happened to come riding through the woods and decided to kiss the dead princess and voila! she wasn't dead after all and she woke up! The end.), but I thought that this one was very well done in that regard. All the plot threads concerning character relationships and connections were done very nicely, in my opinion.
The characters were a bit of a mixed bag for me, though.
The huntsman was definitely the most interesting character; I loved the relationship between his backstory and his natural personality traits. Not all of his decisions made complete sense to me, (Remind me again just exactly how leaving the princess alone makes her safer than she would be with you when she's the one the evil queen is really after?) but he was still a fairly well-developed character and a rough-around-the-edges but still really sweet guy.
Snow White was rather... oh, how shall I say this?... muddled? Maybe it's the result of some residual fairytale 'just because'-ness. We know the princess is as beautiful inside as she is outside, and she's kind and warm and loving and compassionate and sweet-spirited... but we have no idea why. She's just that way, just because. The years she's spent in solitary confinement seem to have had no lasting ill effects on her, which is quite interesting considering the young age at which her imprisonment began. Due to my own pathetic lack of ability when it comes to acting, I'm a little hesitant to criticize someone else. However, I will say that Snow White was very lacking in expressiveness. I think that was what created the muddled feeling of her character - her lack of expressiveness made it very difficult as a viewer to tell what she was feeling or thinking, which made the whole thing feel confused and rather shallow. Her unwavering confidence in herself was a little odd, too. Never once over the entire course of the movie did she wonder "What if I can't do this? What if it isn't enough? Am I really the fairest of them all? Is that really enough to undo all of this?". It was just rather strange. I like characters who have at least enough sense to question themselves from time to time.
The evil queen Ravenna, while indeed exceedingly evil, was in my opinion just downright bizarre. I understand, evil people do evil things. No problem there. However, I fail to understand what bathing in a strange, white, paint-like substance has to do with being evil. At first I thought "Oh, this will come back later and be connected to something significant"... but it didn't. I have no idea what it had to do with anything at all, actually. There were also some cliche aspects to her character - portrayals of cruelty that didn't contribute anything of real significance (We know she's evil. We don't need to watch her eat the hearts of songbirds to figure that out.).
The movie as a whole was extremely dark - the darkest movie I've seen in quite a long time - with very little relief. I understand, the queen is holding the kingdom under a spell of black magic which necessarily means there has to be some darkness, but with only a few moments of relief over the course of the entire movie it got a bit depressing.
There was also a slight problem with randomness, and things just sort of dropping into the story without being attached to anything else or given any kind of a segue. The bath-in-white-paint thing was one such instance. Another one was when the huntsman and Snow White are on the lam through the Dark Forest, and he suddenly stops, hands her a knife, and teaches her one move with it. Then they're off again. But at the very end of the movie, that one move ends up being the one that both saves her life and enables her to kill the evil witch. But between those times she's successfully used a sword to fight her way through dozens of soldiers. So... yeah.
And of course there was the love triangle that was completely unresolved. All I can say is that it had better be resolved in the sequel.
On the whole, not a movie I would necessarily get excited about seeing again, but a good one to have seen.

Any thoughts from others who've seen it?
Posted by Mary Ruth Pursselley at 1:00 AM