If you're like me and don't watch the news, you might not have heard yet about the meteorite that struck Russia yesterday. 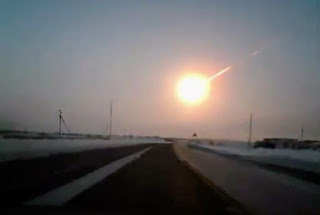 I only heard about it because my dad saw it on the news at work last night. So far it looks like about 1,100 people have sustained injuries due to the massive sonic boom that shattered windows and caused several explosions, so we need to be sure to keep those people in our prayers. 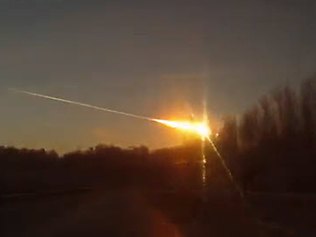 Just watching Youtube videos of the fireball flying through the sky and the explosions shaking the ground gave me chills, so I can't begin to imagine how scary it must have been for the people who were actually there, witnessing it first hand. (I think my first thought probably would have been "Missile!") Several years ago my brothers and I did witness a huge meteor that, we later learned, was seen over five states in the mid-west. Seeing a huge, burning chunk of rock literally tumbling end-over-end across the sky totally freaked us out, but there was no sonic boom or explosion to go with it so I'm sure the fear we felt then was nothing next to what people were feeling in Russia yesterday.
There really are some amazing videos of this on Youtube, so you should go check them out - especially you science fiction writers out there. This is the kind of stuff you normally only get to see in books and movies. It's not often you get to see the real thing!

It's amazing to me to see things like this. It's a sobering reminder of just how small we really are. I doubt many of us have ever thought to thank God for keeping us from being hit by meteors... but maybe it's time that changed. I know I'm thankful that I haven't had to live through that kind of an ordeal (yet, anyway). I'm thankful that my missionary friends in Russia are safe and sound. I'm thankful the meteor didn't hit in the middle of a city, which it very easily could have. God is good, my friends.


Any thoughts on this event, anyone?
Posted by Mary Ruth Pursselley at 1:03 PM

Labels: You News and Announcements