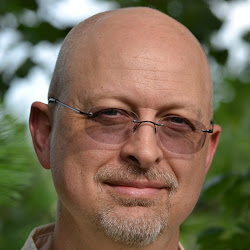 Back again to interview yet another author whose work is featured in the Avenir Eclectia anthology. This time around we're talking with Fred Warren.

MRP: Thanks so much for joining us today, Fred!


FW: I’m very pleased to be here, Mary. Thanks for inviting me.

MRP: You're very welcome. So, what first brought you to the world of Avenir Eclectia and got you interested in the project?

FW: I’d been working with Splashdown Books as an author for a couple of years, and one day, publisher Grace Bridges announced she had a concept for an innovative web-based collaborative fiction project that would connect back to the Splashdown brand and attract new readers and authors. I’d been involved with something similar in a game-based format some years ago, and enjoyed it very much, so I was definitely interested, though I also knew it was going to be a lot of work to set it up and keep it running. I’m pleased with how it’s progressing.

MRP: What do you consider your unique 'trademark' as a writer, and how does that come through in your Avenir Eclectia stories?


FW: I try to season my stories with humor and unexpected twists. If I’m having fun and surprising myself from time to time, I’m hopeful that I’m having the same effect on my readers.

MRP: Your stories tend to focus a lot on what goes on beneath the surface on the Avenir, the things that aren't visible to just everyone. Can you tell us a bit about that (your inspiration, goals, etc.)?
FW: The idea of exploring what goes on in the spaces where nobody is looking is what it’s all about. The two story arcs I wanted to develop exist on two ends of that spectrum.
The Dreamers exercise great influence over the colony’s affairs and see themselves as inheritors of the original command crew’s legacy and its responsibility for Avenir Eclectia’s survival. They work from within a virtual reality world physically isolated from the rest of the colony, manipulating events and people behind the scenes. For most of the colonists, the Dreamers are an urban legend—or a ghost story for frightening little children at bedtime.
The Orphans, on the other hand, live on the margins of the otherwise very prosperous Avenir space station, in the cracks, crevices, and abandoned spots no one thinks about. Their poverty makes them invisible. It also makes them vulnerable to criminal elements who see them as expendable tools and want to exploit them.


MRP: What do you see as the biggest advantage of a multi-author project like Avenir Eclectia?


FW: The diverse viewpoints and voices help create a universe that is incredibly rich and almost limitless in opportunities for storytelling. You feed off the imagination of other writers, and hopefully are inspiring them in turn.
MRP: The biggest disadvantage or challenge?
FW: The flip side of a multifaceted environment that encourages so much creativity is that it quickly develops challenges in consistency and continuity. We’re not just telling unrelated stories in a common setting—we’re building the history of this colony, told from innumerable individual viewpoints. Those viewpoints will, of necessity, overlap and collide. Writers have to be conversant not only with what other writers are doing right now, but also with everything that has gone before, and you need some editorial oversight to avoid or referee conflicts. Things get complicated, like the layout of the space station and other communities, social/political/economic issues, plausible technologies, and the flow of time. In compiling this first volume of stories from the project, we’ve sorted and disentangled some of these problems and have created a user-friendly introduction to Avenir Eclectia for new readers, and a helpful reference for fans who have been with us from the beginning.


MRP: Do you have a favorite memory or experience from the Avenir Eclectia project so far?


FW: The community had an extended, lively debate on the “Bug War” that’s currently developing across multiple storylines. I wasn’t in favor of it at first—AE was barely a year old, and we were planning something that looked very much like our equivalent of the Apocalypse. However, this was the first time nearly everyone got fired up about a cooperative idea, and that’s absolutely essential. In the end, I think it’s brought a lot of fresh energy into the overarching story of the colony, and despite my fears, I expect it’s going to both survive and prosper.


MRP: Can you give us any kind of hint at where your story/character arc is going from here?


FW: Well, my main protagonist in the Dreamer thread has cut all ties with the outside world and is at this moment being integrated into his new life in the Dreamers’ virtual community. I’m curious myself to see how he handles it. The Orphans have just gotten in way over their heads in a conspiracy that threatens to destroy the Avenir station, and they’re going to have a tough time surviving, much less disentangling themselves from the bad guys who got them into this mess. Fun times ahead.

MRP: Fun times indeed! : ) Thanks again for taking time to share with us, Fred. It's always fun talking to another writer, especially one involved with a shared project like Avenir Eclectia.

That wraps it up for this time, friends, but there are more coming. There's a lot yet to be learned about the amazing collage of minds that have been shaping the world of Avenir Eclectia, so stick around!

Posted by Mary Ruth Pursselley at 2:00 AM