This afternoon I was looking through this month's issue of National Geographic Magazine and came across this: 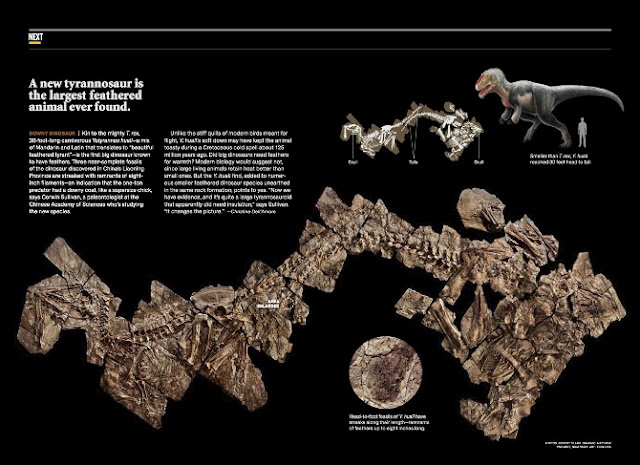 The computer makes it hard to see, but just to the left of center in the photo is a little circle outlined with a dotted white line. That portion has been enlarged in the circle you see just right of center. According to the caption, that dark-colored smudge in the enlarged circle is a remnant of "feathers up to eight inches long". At top right you'll see an artist's concept of a tyrannosaur-like dinosaur covered in furry, fluffy feathers.
Now, first of all, while I am not a paleontologist and don't claim to have any kind of expertise in this field, I think I'm smart enough to recognize a fossilized feather when I see one.
This is a fossilized feather: 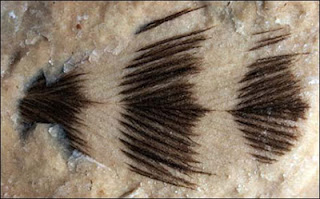 This is a fossilized feather:

Sorry, but I don't see any feathers in that NatGeo photo. Those smudges are far more likely to be collagen fibers, created during the decay process of the fossilized animal's body.

The brief writeup on the photo states that the feathers were "soft down (that) may have kept the animal toasty during a Cretaceous cold spell", not rigid feathers meant for flight. It describes the dinosaur as "a supersize chick".
I'm a little confused about the idea of "soft down" eight inches long, though. The closest thing I can think of to that is an ostrich's soft body feathers, which do get that long but would, one would think, show up in a fossil as more than a smudgy spot or two, and well enough to be defined under a term a bit more precise than "filaments" (the NatGeo writeup's word of choice).

I also have to wonder how this fits together with the new theory that dinosaurs' own methane emissions (i.e. burps and gas) caused global warming. (No, I'm not kidding. That is an actual theory, and you can even read about it in the LA Times here.) If dinosaurs went extinct during the global warming they caused between 161 and 145 million years ago, how did they have the time or foresight to evolve feathers for the Cretaceous cold spell 125 million years ago? And if they were adaptable enough to evolve feathers in time to keep from freezing to death, how did they manage to go extinct in the first place?
All that aside, the most glaring problem with the downy insulation theory is the fact that dinosaurs are reptiles and therefore, we can reasonably assume, cold blooded. If their bodies are not generating their own heat, a layer of insulation is totally pointless. If anything, it's going to have the opposite effect: keeping out the warmth that needs to be coming into the animal's body from outside.
Secondly, down only works as insulation if there is a course outer layer over it. Back to my ostrich illustration, you'll notice that an ostrich's feathers are all very soft and down-like. But the ostrich lives in the desert. The feathers help it keep cool, not warm. Even a goose-down sleeping bag is covered with an outer layer to hold the warmth in. Those of you who have raised chickens know that baby chicks (covered only with soft down) are extremely susceptible to even slightly cool temperatures, because they have no outer layer of feathers to hold in the warmth. Where is T-rex's outer layer? Shouldn't that be showing up in the fossil too?

I could go on. The entire writeup (less than half a page long) is so full of items and points I could challenge, but I'll stop here. I'm sure you all get the idea, though I would encourage every one of you to look up the article at your local library or online and see it for yourselves.
I would also encourage you to learn more about these so-called feathered dinosaurs scientists have found and touted as powerful evidence confirming evolution. Answers in Genesis has a fabulous article on the very dinosaur pictured above, explaining details about it with tremendous depth and clarity. Click Here to read AiG's article. Learn the truth about these controversial fossils, so that you can always be ready to give an answer for your faith when people question you or make false statements like this.
And lastly, don't be afraid to stand up and speak out about things like this. The propagation of evolution is dependent on intelligent people keeping their mouths shut and not asking too many tough and embarrassing questions because they don't want to challenge an 'expert' opinion. You may not be an 'expert', but the people who are learned from other experts, who learned from other experts, who learned from looking at fossils and making up theories. You're an intelligent human being who can see a fossil just as well as they can. Don't let them insult your intelligence by making you feel ignorant, and don't be afraid to respectfully challenge their expertise.