I'm currently reading Perelandra, the second book in C.S. Lewis' Space Trilogy. I'm not very far into it yet, but one line in particular really grabbed my attention:


"A man who has been in another world does not come back unchanged." 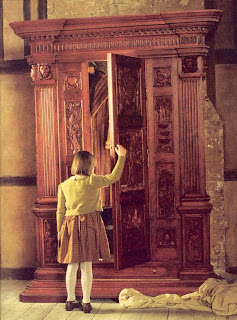 This really resonated with me, because it made me think about my writing and how, as a fantasy writer, I have the privilege of 'voyaging', in a sense, to other worlds. Take Reyem, for instance. Reyem is the fictional world of Son of the Shield and the series following it. I've been discovering, exploring, and writing in that world for five-and-a-half years.

And I don't have to think twice to know that it's changed me.

Because of the time I've spent working on, thinking about, and praying about Son of the Shield as well as the overarching plot of the Adelfian Prophesies series as a whole, I have had to spend huge amounts of time studying and thinking about things like God's grace, His forgiveness, His sovereignty - all elements necessary to the story, that I wanted to be sure I was communicating well. Had I not written Son of the Shield, I might never have thought about those things as much as or in the specific ways I have.
While writing in Reyem I've lived through the losses of loved ones, personal disappointments and stresses, and financial struggles. I've also seen God provide comfort, solace, hope, peace, courage, as well as physical and financial needs, without fail. All of that has, in one way or another, entwined itself with my writing. Sometimes the situation I was living in helped me work through part of the story. Sometimes an element of the story that I had already worked through and poured prayer into turned out to be God's provision, ready for me even before I knew I needed it. Sometimes it was as simple as knowing exactly how to describe a character's feelings, because I had experienced them myself.

My 'voyage' to the world of Reyem and the time I have spent there have been well invested. I believe it is an adventure that God has invited me to take part in, at least partially for the purpose of teaching me more about Himself.
That's the thing about 'God adventures': they're always for a purpose, and they never leave us the way they found us.
Posted by Mary Ruth Pursselley at 1:00 AM

Labels: You C.S. Lewis, Fantasy, My Thoughts, My Writing