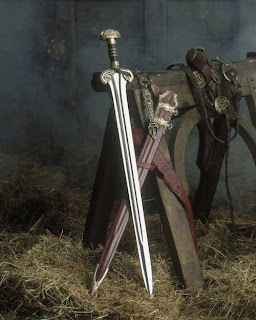 A great deal of the time, especially in fantasy fiction, weapons are very important to a story. Whether a particular weapon is the key to the hero becoming the hero, or the hero just happens to use weapons throughout his adventures, the point is the same: the average fantasy hero needs to be well-armed, and as the writer it's your job to arm him.
So where do you start? Is it enough to just hand your character a sword and send him on his merry, swashbuckling way?
Not really.
Personally, I've found that a character's personality and mindset have a great deal of influence on the type and number of weapons he carries. For this reason, I include questions about weapons in every character sketch I write. Here are some of the things I like to take into consideration:

What is the character's motivation for carrying a weapon? Is he a 'professional warrior' type (such as a soldier, knight, or bodyguard) for whom carrying a weapon is just part of the job? Is he a business man who keeps a weapon on hand simply to protect the security of his establishment?

What is the character's mindset about using his weapon(s)? Is he a bodyguard who will use his sword at the first sign of a threat to his charge? Or is he more likely to draw his weapon and hope that the sight of it will have the desired effect so he doesn't actually have to use it? Is the use of weapons his first response or his last resort?

Is there a certain effect your character is trying to achieve with his weapon choice? Is he all about practicality, or does he go in for the look of the thing too? This question works particularly well for arming the villain of your story. Does he want a weapon with swift, silent deadliness, or does he want to make a show and work off of the intimidation factor?

How much training does the character have with his weapon? Is he a knight who trains for hours every day, or a farmer who is content just knowing he has a weapon on hand?

Learning the answers to these questions will help you figure out how many and what kind of weapons your character carries. For instance, a farmer who only carries a weapon in case he happens to come across a venomous snake or wild dog probably won't be carrying a sword belt or battle axe while plowing the field. A professional fighter like a soldier or knight will probably have more of a combat preparedness mindset and carry more than one weapon.
When it comes down to choosing the right weapon for your character, though, there are dozens of options, and it's an important decision. In the end you very well may decide to stick with a basic, nondescript sword. On the other hand, though, you just might want to go in for something a little different. So in the next few posts, I'm going to be showcasing and discussing different types of weapons you may be familiar with, or perhaps weapons you've never even heard of.
Feel free to join in the conversations--that's what the comment box is for!

Meanwhile: How do you choose a character's weapons?