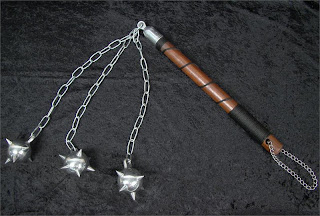 This is a flail. I often hear people referring to it as a mace, but that is incorrect. The confusion probably stems from a variation of the flail, known as a chain mace. The flail was used by foot soldiers and knights alike (although flails carried by knights were usually smaller) and was an excellent weapon to use against armored soldiers. The chains created an enormous amount of momentum when swung by the user, allowing the heavy, spiked metal balls on the ends to damage armor (making unearthly amounts of noise in doing so) and cause severe injuries.
While it may be effective as a weapon for a skilled user, personally I just don't look at this weapon and think 'Wow, what a good idea'. It's a formidable offensive weapon, but you couldn't use it for defensive purposes, and frankly I foresee me hurting myself with this weapon more than I see me hurting the enemy. It would be great for the intimidation factor if used by a villain, though! 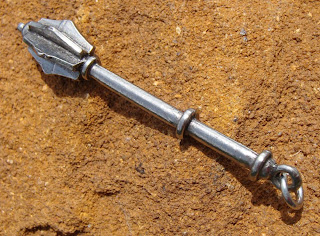 This is a mace. In the Middle Ages it was cheap and simple to make, which contributed greatly to its popularity. A mace's handle or shaft could be from 1 to 5 feet long and made of wood or metal, and the head could be made of wood or stone. Also known as a flanged mace, this weapon had a knobbed or spiked head that made it brutal in close combat, even against heavy armor. It's certainly not an elegant weapon--personally I see it as just a glorified club--but, to each their own. 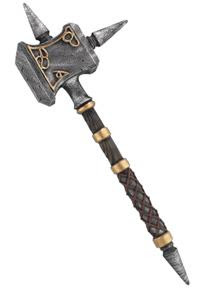 This is a war hammer. The one in this picture is somewhat stylized; most war hammers were very basic and straightforward in their design, and their spikes were curved, enabling the bearer to grab at the edges of armor or hook horses' reins and pull them away from the rider. And of course the hammer head itself could deliver a powerful blow and deadly injuries.


What are your thoughts on bludgeoning weapons and the more gritty, ruthless side of combat that seems to go with them?
Posted by Mary Ruth Pursselley at 1:00 AM