Polearms get the spotlight this time! While you probably won't have your hero questing around through his grand adventures carrying a 14-foot pike, many fantasy stories involve armies--and armies need to be armed too. So this post features some great weapons to issue your troops, as well as some you could give to individual characters if you wanted to. Enjoy! 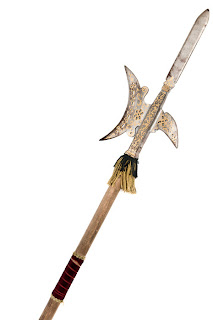 This is a halberd, which is essentially a pike with an axe head added to it. Pikes and halberds were the weapons of choice for combating knights on horseback. Both weapons had shafts (usually made of wood) that were between 10 and 14 feet long. Needless to say, the length made them useless in close combat, so pikemen always carried a sword and dagger with them in case they had to fight a horseless knight on foot. The horse could be as much of a target for pikemen as the knight riding the horse was; without his horse, a heavily armored knight was practically helpless. 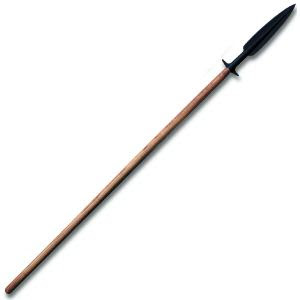 The spear is one of the oldest styles of weapons we know of, and it's versatile too. It could be used for hunting or fighting, and could be thrown or thrust. This particular picture is of an Angon--a 6-foot spear used during the middle ages, but based off of an ancient Roman design. Javelins, lances, and even modern bayonets are all variations on the spear concept and theme. 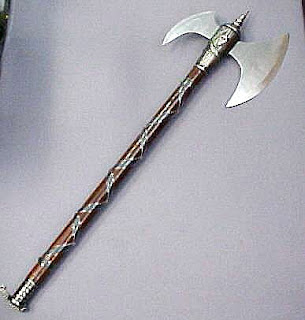 This is a poleaxe, or battle axe. Like the pike and halberd, it was most commonly used against armored knights on horseback. The shaft was relatively short--only 4 or 5 feet, usually. A poleaxe was capable of cutting through armor or severing an opponent's limbs. As in the case of the pike, axe men carried smaller weapons such as swords and daggers with them in case they had to fight in close quarters. The battle axe is a weapon that works well for arming your literary forces en masse, but it would make a great primary weapon for a hero or arch-villain too.

The polearm category is a broad one with many styles and variations of weapons falling inside its brackets. I've featured the main ones, but someone willing to do a little research or use their imagination could easily turn up many more styles and applications. So have fun with them and don't be afraid to make them your own!

The next installation of Arming Your Hero will feature bludgeoning weapons. Be sure not to miss it; you never know when your characters might need to bludgeon someone. : )
Posted by Mary Ruth Pursselley at 1:00 AM