Every great hero of fantasy fiction needs to be well armed, right? And, if you're writing fantasy fiction, the most popular weapon of choice is a sword.
But of course, 'sword' is a very broad and rather vague word, and every great character needs a weapon that compliments their own personality and style. (Would Aragorn be half so Aragorn-ish if he carried a rapier rather than Narsil? What would Peter Pevensie be without the sword given to him by Father Christmas?)
There are many different kinds of swords out there, though. So with that in mind, I've put together a list--a showcase, if you will--of the basic styles of swords, to help you fantasy writers out there figure out just exactly what it is your hero (or any other armed character) is carrying. Enjoy!
~~~~~~~~~~~~~~~~~~~~~~~~~~~~~~~~~~~~~~~ 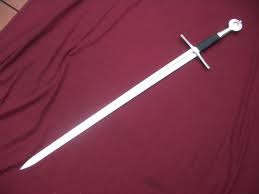 This is a broadsword--your most basic, straightforward sword design. It can come in variations of one-hand, hand-and-a-half, and two-hand design, and the hilt and crosstree can be as simple or as elaborate as you like, so there is a lot of flexibility to work with here. 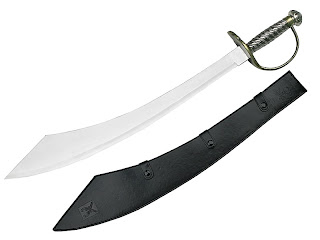 This is a scimitar. It was the weapon-of-choice for the Turks during the crusades, and probably due to that fact, it often brings to mind images of sheiks and desert nomads (or the Calormen army running around and harassing Narnia). 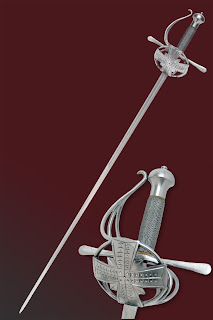 Here is a rapier. The picture probably has you thinking of The Three Musketeers or A Tale of Two Cities, and rightfully so. The rapier was used historically in private duels, but played its role in warfare as well. It also made a classic appearance in fantasy fiction in The Princess Bride. 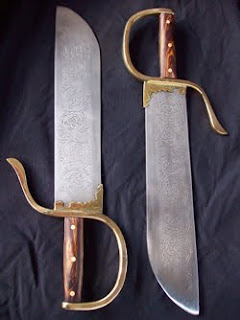 These are butterfly swords--one of my favorite weapons. I love them for their totally distinctive look, but one of the coolest facts about them is that they belong in sets of two; the inside of the grips are flat so that the swords 'nest' together in a single scabbard (talk about a recipe for trailer moments!). 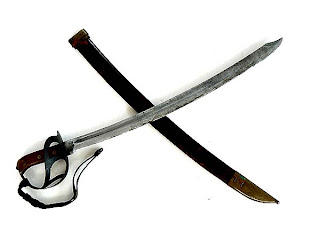 I hope y'all enjoyed this post, but even more so, I hope it will be helpful to you as you're building and developing your fantasy worlds and the armies and fighters who inhabit them. There's more to come; in Arming Your Hero Part 2 I'll be showcasing smaller knives used in hand-to-hand combat.
In the meantime: What's your favorite type of sword? What kind do the characters in your fantasy stories use?