In this installment of the 'Arming Your Hero' series, we'll be looking at war machines and siege weapons. While they don't often have prominent roles in fantasy stories, these weapons are an important part of medieval-style warfare that writers should have at least a working knowledge of. If your hero is commanding an army that's laying siege to a castle, fortress, or city, they may want to use one or more of these weapons. Or, if your hero is the one being besieged, here's what he can probably expect to encounter.
~~~~~~~~~~~~~~~~~~~~~~~~~~~~~~~~~~~ 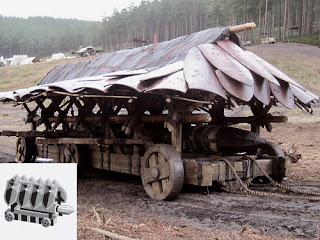 This is a battering ram--probably the most well-known siege weapon in existence. The ram itself was made from a large tree trunk fitted with a metal head on one end and usually reinforced all along its length with thick metal bands. The head was most often flat on the end, which enabled it to crack stone walls with blunt force. A pointed head (like the one pictured above) was more likely to get stuck if driven into a wall. The tree trunk itself was suspended from the top of the battering ram's frame by ropes or, more often, chains. This enabled soldiers to swing it back and forth, building momentum as they pounded it into walls, gates, or doors. The roof of the battering ram (called the Penthouse) was extremely important. The soldiers inside had to be protected from arrows, spears, rocks, boiling oil, fire, or whatever else the besieged forces had to throw at them. Many times the penthouse was protected by shields overlapping like scales, as pictured above. Often, however, it was only covered by planks of wood, or even just cow hides. 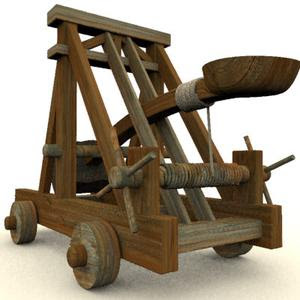 This is a type of catapult known as a mangonel. The design goes as far back as ancient Rome, but the catapult was still being used well into the Middle Ages. Using a tension pulley system, the catapult could launch projectiles over castle or fortress walls, or just fling them into oncoming enemy ranks--up to 1,300 feet away. Projectiles were usually rocks or flaming materials, although in some cases where a siege was particularly long and drawn out, a besieging army would throw dead animal carcasses or even human bodies over the walls to spread disease among the enemy (and produce some extremely negative psychological effects as well). One problem with the catapult design was that it had the potential to 'beat itself to death', so to speak. When the tension holding the arm down was released, the arm flew up at a high rate of speed and slammed into the cross bar at the top of the machine. The impact of the collision launched the projectiles incredible distances, but after a while it could be hard on the structure. 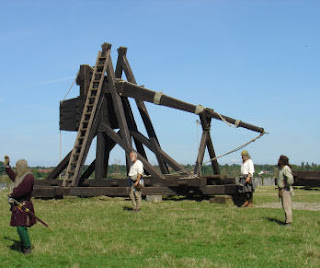 This is a trebuchet. It may well be the most ancient siege weapon design in existence, believed by some to have been invented in China as early as 300 B.C. The earliest trebuchets were called traction trebuchets, and used manpower to pull the arm down and launch the projectile. Traction trebuchets were later replaced by more advanced counterpoise trebuchets, which used a counterweight on the short end of the arm to propel the ammunition. The weapon pictured here is a counterpoise trebuchet. Trebuchets had their downside--it took a great deal of time, precision, and mathematical know-how to build one--but their amazingly accurate aim and power made them worth it. A good trebuchet could throw a 200 pound stone up to 300 yards, and a skilled trebuchet team could launch as many as 2,000 stones at the enemy in a single day. Needless to say, if you want to reduce a city, fortress, castle, or anything else to nothing but rubble, a trebuchet is probably the place to start. 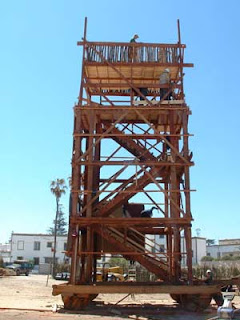 This is a siege tower. It looks like heavy-duty scaffolding, and that's essentially what it is. When the terrain permitted, an army would sometimes wheel a siege tower up to the walls of the castle or fort they were besieging and send their soldiers up to the top, where they could then run out on top of the castle walls and get inside. Many siege towers had a drawbridge-type door that opened onto the top of the wall, providing a ramp the soldiers could walk across. Siege towers could be made in an open design, like the one pictured here, or they could be enclosed and armored. The trouble with siege towers was that they were slow, difficult to maneuver, easy to burn down, and if one was rolled up to your castle's wall you knew exactly where the soldiers would be making their entrance. I suppose if you had enough of them, though, you could simply overwhelm the enemy with numbers.
Another weapon that was invaluable during a siege was a ballista. The ballista was basically a giant crossbow that launched enormous arrows or darts hundreds of yards. The arrows were wooden, but covered in a layer of iron; one arrow launched from a ballista could rip through several soldiers at a time.