Swords are amazing and fabulous, no doubt about it, but they don't make a fully armed hero, and they aren't ideal in every situation. They're difficult and time-consuming to make, expensive to purchase, heavy to lift, and hard to conceal. If your character gets attacked in a tiny alley barely wide enough to walk through, a sword isn't going to be very helpful. If he's trekking through the wilderness and kills a rabbit to eat, a sword is just slightly overkill (and extremely difficult to use as a skinning knife). Plus a sword could break, get stolen, or get knocked out of his hands. Then where would your swashbuckling hero be?
Obviously, he needs a backup or alternative plan, and a smaller knife may be just the thing. So here are some common kinds of smaller blades you just might want to slip into your hero's arsenal.
~~~~~~~~~~~~~~~~~~~~~~~~~~~~~~~~~~~~ 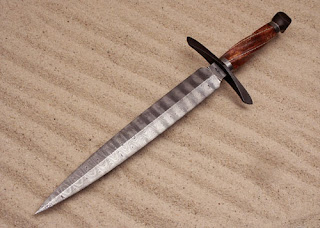 This, of course, is a dagger--probably the most common small weapon used in fantasy fiction. It's popular for a reason; it's small enough to conceal under a cloak or tunic, but it's still effective. And for a word nerd like me, what's not to love about something with a name as dramatic as 'dagger'? 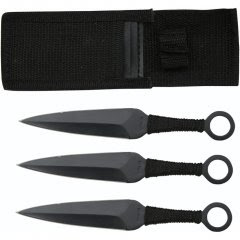 These are throwing knives. If your hero is facing multiple assailants or wants to take down that 12-foot troll before it gets close enough to pulverize him, a few well-aimed throwing knives could be very handy. Notice that I said 'a few'. A fantasy hero carrying only one throwing knife is something like a wild-west cowboy carrying only one bullet. What if the opponent doesn't go down after the first shot (or throw)? And of course, there's always the chance that he could miss, so it's better to be prepared. 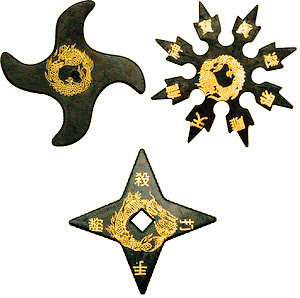 These are throwing stars. The concept is basically the same as that of a throwing knife--helpful if you're facing multiple attackers, and perfect for getting the attacker before he gets you. Some of the characters in my WiP use throwing stars, but I've never read a published book where they come into play. I don't really know why no one uses them, because I think they have a lot of cool potential. 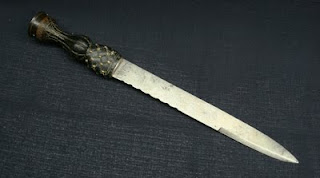 Here is a dirk. Historically, it was most commonly used by the Vikings and ancient Scottish clans. Perhaps that's why, for me at least, the dirk has a sort of ancient, legendary connotation. It's versatile enough to be used in any number of different settings, though. 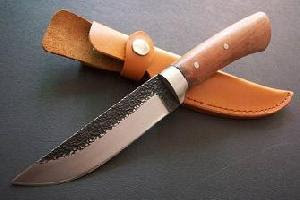 And here, last but not least, is a hunting knife. It can certainly be used in self-defense if need be, but basically it's just something every prepared and savvy hero should have at least nearby, if not on his person. Whether he needs to kill, skin, and butcher an animal to eat, slice a piece of bread or cheese, or clean his fingernails, the hunting knife makes a great all-around tool to have on hand.
~~~~~~~~~~~~~~~~~~~~~~~~~~~~~
What's your favorite small weapon? What is your hero's backup weapon of choice?
Posted by Mary Ruth Pursselley at 1:00 AM