Here is the final installment in the 'Arming Your Hero' series... for now, at least. My brother James is hounding me to do a related series on sci-fi weaponry, but in my opinion that is just way too broad of a topic (especially since James doesn't even write). If sci-fi weaponry is something you would be interested in seeing here at the Lair, though, leave a comment and let me know.

Now then, down to business: arming your hero--as in, putting armor on him. 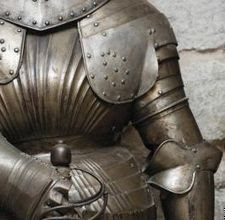 I'm not going to go into piece-by-piece detail on parts of armor and kinds of armor--that could be a post series by itself. Mainly, I just want to cover a few issues, misconceptions, and ideas about armor, wearing it, and using it.
A lot of people have the idea that a knight wearing armor had to be lifted onto his horse with a crane, or some such notion, because the armor was so heavy he couldn't mount a horse by himself. I understand how that idea could come about--after all, armor is heavy, true enough.
But a.) if the knight's armor is so heavy that he can't get onto the horse, chances are even a warhorse isn't going to be able to carry him any significant distance at any significant speed, and b.) if his armor is so awkward that he can't mount a horse, how is he supposed to be any use fighting?
Armor was heavy--very heavy. A normal suit of war armor weighed between 70 an 90 pounds. Jousting armor, which was designed to take hard hits, was heavier--90 to 100 pounds or more. So knights trained long and hard for wearing it and carrying all that extra weight. Even before he could become a knight, a squire went through arduous physical training to learn to function and fight in armor. It's really no different than what our armed forces do today. An American soldier in the Middle East today is carrying roughly 100 pounds of body armor and equipment, and he can still run, jump, fight, and work.
Furthermore, armor was fitted to the individual knight and designed to allow the most flexibility and agility possible. The armor was jointed where the knight was jointed, and fitted to match his particular body shape. So it's not as if he was a hermit crab who just squeezed into some random shell and ran with it. His armor was made for him and fit accordingly.
This also speaks to the incorrect idea that, if a knight was unhorsed, he was as good as dead. Certainly he was much more vulnerable on the ground than on his horse, but if he is trained to fight in full armor, he still stands a chance.

Your hero has options when it comes to how heavily and thoroughly armored he wants to be. If he's riding into battle he may want to suit up and go in full armor, but if he's a scout, or a bodyguard, or whatever, he may only want a piece or two--or none at all. Remember, armor isn't only the solid metal part. Your hero could wear chain mail, or leather, both of which were often used as layers of padding and extra protection under the outer armor. Or he could wear just an essential piece or two of armor, like the curaiss and pauldrons to protect his torso and shoulders, or greaves and vambraces to protect his arms and legs.
By the way, if you don't know the parts of armor and need to find out, I would advise you do a Google search or stop by the library to learn more. As I said before, there is way too much information on the subject to put in a single blog post, but you can get some great ideas as well as info if you do some reading on the development, history, and different styles of armor.
You'll also want to keep in mind that armor is very expensive. Not only is it a lot of work to make, but it has to be made to-order every time. So, depending on his financial situation, your hero may or may not be able to afford a full set.

That about wraps it up for the Arming Your Hero series. I've had a ton of fun writing these posts, and I've even learned a lot myself in researching the weapons we've talked about. I hope all of you have enjoyed it as much as I have. Be sure to stick around the Lair; as always, I have a lot of big plans for upcoming posts!

Any thoughts you have on armor? Anything in particular you'd like to see discussed or spotlighted here at the Lair?
Posted by Mary Ruth Pursselley at 1:00 AM