If you want to venture outside the traditional realm of swords and knives to arm your hero, a bow and arrows are a good place to start. Bows seem to be popular among elves in fantasy fiction, but they would be handy for anyone with the skill to use them effectively. The downside to archery is that it has a limited number of practical applications. It can't be used in close, hand-to-hand combat, and of course your character will be limited by the number of arrows they can carry. In the right setting, though, a skillfully-wielded bow is a deadly force to be reckoned with.
So here is a lineup of basic bow styles writers can choose from. Enjoy! 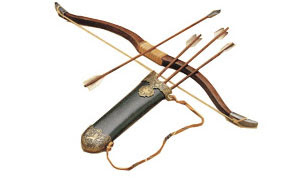 This is just a basic plain bow, sometimes called a self bow. It has anywhere from a 40- to an 80-pound draw, and a relatively short range--usually from 10 to 50 yards. It can be made out of wood alone, or a combination of wood and horn. 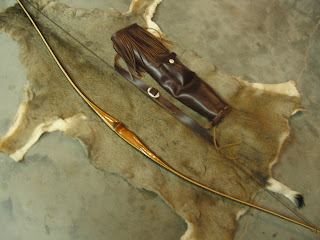 This is an English longbow. Longbows are usually as tall as, and sometimes taller than, the archer, and have excellent range (well in excess of 200 yards). They have anywhere from a 60- to a 200-pound draw and can puncture armor at up to 250 yards. 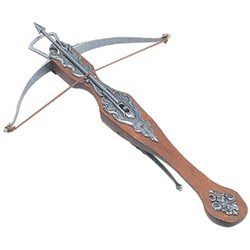 It's important to take pull strength into consideration when deciding to arm one of your characters with a bow. For instance, if the character in question is a girl, arming her with a longbow that has a 200-pound draw might not be the best idea in the world. (And don't think you can get away with it and nobody will notice. Even if it slips past your editors and publishers, a reader--probably more than one--will notice and say something.)
One erroneous idea that has been promoted through books and movies is the concept of carrying your bow across your back with the string across your chest. Whoever came up with that idea had never done it--it is outrageously uncomfortable, and hard on the bow string to boot. So don't go off half-cocked. Do your research and make sure you're not writing something that's totally inaccurate.
But after that, have fun! They may not be appropriate for every character and every circumstance, but bows and arrows still have a lot to offer your fictional characters' armory.

Do you use bows often in your fiction? What's your favorite bow style?
Posted by Mary Ruth Pursselley at 1:00 AM